Our year in food retail has seen the widespread closure of outlets, rather than regeneration. It has been a tough year, with the dual influence of rising costs and external pressures. There has been an escalation in shutdowns as marginal operators have started closing the doors earlier and walking away from unrealistic leases.

Press in this area has been increasing and there has been a slew of prominent restaurants closing their doors. 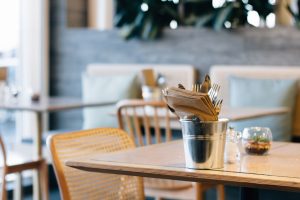 In the wider market this has been a common trend, we have noticed that food courts and centralised food locations are starting to show more closures with no replacement for the departing outlet. This generally diminishes the allure of a location, and once one venue goes it can be difficult to recover.

The influence of delivery services has increased revenue, but not necessarily with an increase in profit, as margins are being squeezed. We have noticed an increase in dark (offsite) kitchens and a preference for shutting staffed locations.

Observations On the Ground

Sadly, this has been a year where closure has been the norm and it has involved attempting to extract the best result with the shortest amount of time. Where outlets would normally be salvageable, unrealistic landlords have meant that options are limited or non-existent.

Best results have come from multi-use locations, where we are able to supplement or reduce the rent imposition. For businesses that may only have a lunch or dinner offering, a sub tenancy arrangement with a coffee / breakfast operator has been successful. Equally there has been good traction in using a breakfast / lunch venue as a small bar with limited food options. Each business running in isolation but being able to share the occupancy cost.

Conversations we’ve had with owners have shown a similar trend this year: rents, staff and customers are each causing problems. Meanwhile, competition is increasing and there appears to not be a simple solution.

Staffing continues to be difficult, and poorly laid out venues are one of the biggest issues we have seen in terms of inefficient utilisation of staffing. Where there has been a conversion of an existing premises, we are yet to see a functional layout that won’t end up increasing the overall staff cost.

There has been a trend of absent owners, which has continued into the year and been a constant source of new engagement for us. We are finding that traditional operators seem to be doing better as they are able to control costs and manage the issues as they arise, while absent owners continue to be problematic.

The influence of Retail Food Group has been significant and made things more difficult for businesses near their locations. This has especially been the case in smaller venues where they are a dominant tenant.

Working with our clients this year, we are noticing that things are getting tougher earlier. Early engagement with stakeholders such as landlords appears to be more successful than waiting until later, but there is still a lack of realism.

Structural factors such as increasing costs and reduction in patron spending herald wider concerns in the industry. The influence of food delivery services and expectations of patrons are becoming tougher. Staffing and continual pricing pressures make it harder to run premises in quiet times, which means that rostering is key.

As input costs continue to rise there is a balance between increasing prices and risking the loss of customers as a result. The strong operators are already adapting to this change and are able to balance the requirements.

Wider economic concerns are impacting business and need to be addressed. For businesses that are struggling now, the prognosis is not great, and without significant change there is unlikely a panacea to the improvement of the business. We are watching these marginal operators start to stumble and it is becoming more of a reality over the next year.

Unrealistic landlords continue to be a strategic concern for operators, and we are noting that those with a rigid approach to tenancy are finding higher levels of delinquent tenancies or struggling to find tenants. Where landlords are not willing to meet the market or to retain tenants, we are seeing that tenants are choosing to leave, often to the detriment of complimentary businesses surrounding the location.

In analysing businesses this year, there has been a common thread of relying upon the finalisation of the election to give a shot in the arm and improve trading. In a short period of time we are already seeing that the expected jump has been more of a sugar hit than significant upward improvement. Without overall economic improvement, we feel that the marginal businesses will struggle to continue in the upcoming year.

Throughout the year we have noticed the success of smaller venues, where the staffing costs have been controlled and occupancy costs have been well managed (either through split tenancy or renegotiation).

Active management seems to be the key, and where management are on the ground there appears to be a better approach than where they are absent and operating remotely.

Where operators are aligning with delivery services, we are finding that alternative menus have worked more efficiently than the standard menu, where the margins are too thin to make profit. Furthermore, running venues as a “dark kitchens” on off-nights (when staff costs and input costs can be controlled) have been equally successful.

A key factor has been the affordability aspect. Our most successful outlets have been where there has been a low cost or realistic priced offer for off-hours liquor retail. For venues that have been struggling with traction, we have found that a smaller bar style approach has been significantly more successful than alternatives.

Where to from here?

Being on the ground in 2018/19 has given us an insight into what is happening in the year ahead, and we expect that things will continue to be challenging. Taking active steps for the continuation of business now will mean that there is a better chance of survival for the tough times ahead.

It’s not all doom and gloom, but things are getting harder and businesses are going to need to be smarter in order to survive. Businesses that are struggling now are unlikely to be able to pull things around without significant change.

We’re always happy to work with organisations that need guidance, and welcome you to contact us on 1300 023 782 or email team@cdrta.com.au to schedule a no-obligation consultation.