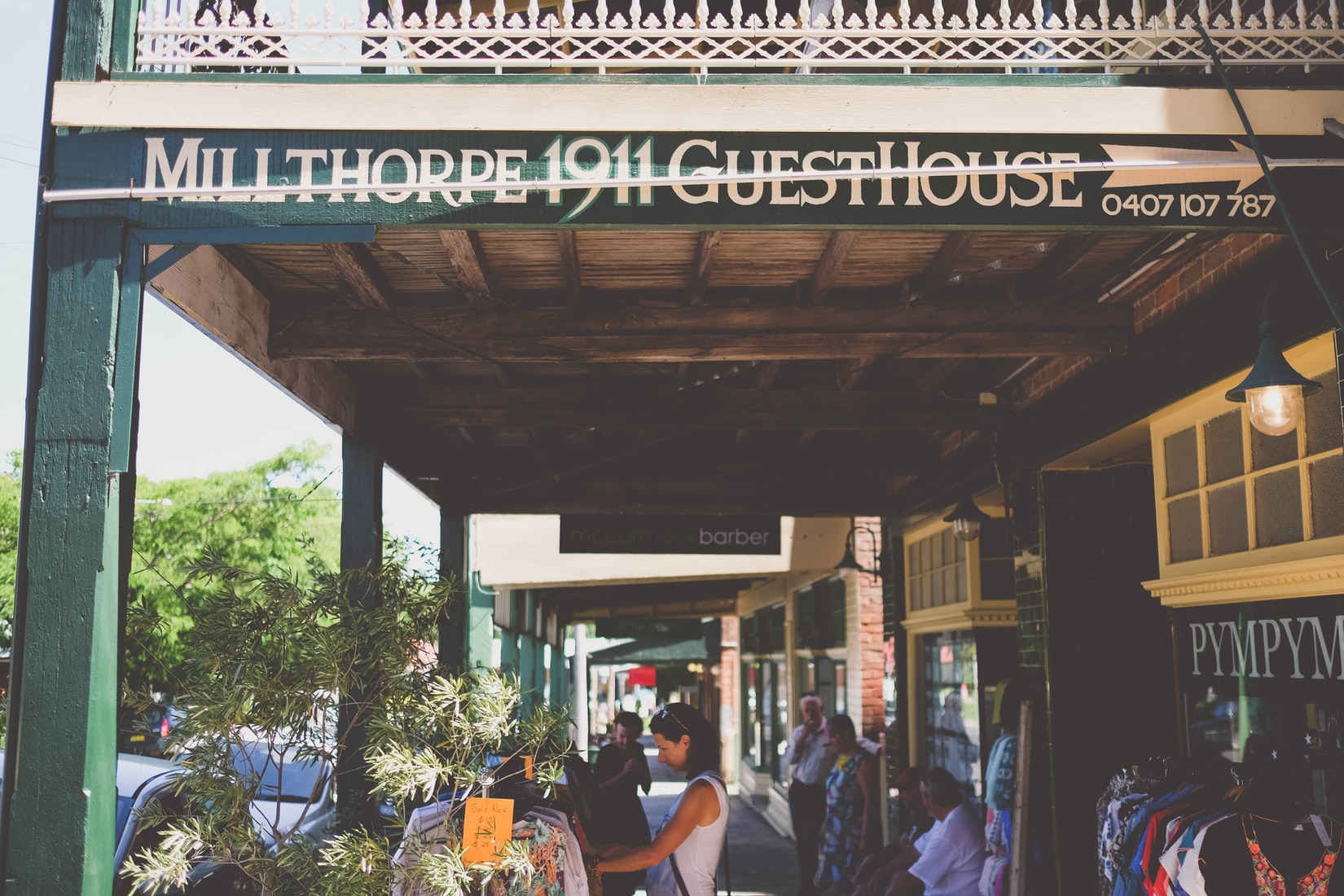 A thriving small town is one where the shops are open and there is a vibrant centre. Currently though, the norm appears to be that half the shops are closed and new businesses are struggling to open or survive, facing unrealistic start up rents which discourage entrepreneurs.

Unfortunately, the vacancy rate in small towns continues to be a problem and it is time for councils and Government to put pressure on landlords with vacant premises to do something and remove the blight of boarded shops. In towns like Armidale with 18 vacant retail stores just in the main pedestrian mall, and a main shopping mall with a quarter of the shops empty, the onus shifts from business owners to the council.

Benefits of the Local Shopping Strip

The neighbourhood and civic commons … are nuanced places that have evolved over decades or centuries and been animated by diverse bottom-up forces throughout that evolution. They provide within a single bounded and traversable realm most of what one might need, conveniently clustered and integrated to provide accessibility, diversity, symbiosis, complexity, and intimacy. Their intricately evolved complexity built upon relationships and synergies incrementally developed over time and space means they are impossible to replace once lost to thoughtless development (Brugmann, 2009; Forsyth and Crewe, 2009).

Thriving local shopping strips significantly decrease the percentage of transactions that lead to direct outflows of money out of the community. Locally owned independent businesses in locally owned stores are much more likely to purchase locally, use locally based ancillary services, and distribute philanthropy locally, whereas the corporate giants found in shopping malls tend to purchase nationally or internationally, and use ancillary services near their headquarters, therefore reducing the amount of money circulating through the community.

Regional economic activity thrives when nurtured by the innovation and ingenuity of local entrepreneurs, and the spending power of an engaged community. Local entrepreneurs are also usually in the best position to observe the needs of their town and respond in innovative and tailored ways to the niche opportunities of their local communities.

While shopping mall development in towns is often touted by politicians, developers and free market advocates as producing an economic boost and employment in the community, research has found there is no evidence of this in the short or long term. Case studies focused on Armidale, Griffith, and Renmark have provided evidence that such developments lead to small losses of local businesses and employment in the short term, which grows with the cascade effect over the medium to long term.

The Role of Landlords

A suggested solution to commercial vacancy rates has been for the council to encourage or punish landlords that retain vacant shops for extended periods, especially where vacancy times are beyond a reasonable turnover.

The cascade effect of vacant shops is substantial and the departure of one tenant often heralds the long-term decline of a centre. New businesses are discouraged by the presence of empty shops and those remaining are impacted by the lack of diversity.

In analysing market rents, we noted a similarity in rental rates between towns with disparate populations. In our review, towns with populations of 25,000 had similar square meterage rates to regional hubs of 100,000 plus. A common refrain was that the tax concessions made it viable to keep shops empty rather than drop rents and have them tenanted. Only the removal of these concessions would bring positive results to these locations.

Another factor that could be contributing to higher retail vacancy rates in new mixed-use developments were bank rules that sometimes made it difficult for landlords to adjust asking rents to meet market expectations.

Rents that differ to those projected at the time of the property’s development, or even the latest rent received for the property, can alter the loan-to-value ratio on a property. This would result in higher repayments, thus increasing the temptation to keep a property vacant.

Cushman and Wakefield’s head of retail leasing NSW, Matt Hudson, said that “overvaluing the space” during the initial stages of a new development plays a big part in these discrepancies, similar to the recent spate of apartment valuation shortfalls in the residential sector.

The Role of Council

Whilst Government has been pushing land tax “penalties” for vacant residential properties, this has not extended for commercial premises and the conversation needs to be had quickly as to what can be done to fill long standing vacant premises.

Calls for an “empty shop tax” have escalated after small business commissioners first backed the proposal earlier this year. The tax aims to discourage property owners from keeping stores empty rather than cut the rent.

Family Enterprise Ombudsman Kate Carnell has stated that “One of the great dilemmas we’ve got is that there are incentives for landlords to leave premises vacant rather than reduce rent,”

“It’s simply because of the way banks value properties based on what the rent is.” Ms Carnell said.

Using the example of Armidale there are three “shopping” malls on top of a central business district and simply not the population to sustain the quantum of retail shops, and this challenge is exacerbated by rents that are unaffordable and unrealistic. Continual approval of additional shopping facilities while there are substantial vacancies needs to be discouraged, as the building of these premises is only a short-term sugar hit to a rural economy, whereas the long-term damage is substantial.

Our recent case study focused on the role of the Armidale council in failing to encourage the revitalisation of the town’s main pedestrian shopping strip. Shoppers were even discouraged from shopping in the CBD by an uncommercial parking system which automatically fined drivers when they exceeded their time limit. It’s unclear whether the boost in revenue from the ensuing fines will be worth the long-term economic damage caused by the detriment to local shops.

The council’s decision to move the library outside of the town has been another factor in the decreased foot traffic along the main drag. Although the council promised a “repurposing” of the site, this hypothetical mystery development has yet to materialise.

An example of the success achieved by proactive councils can be seen in towns like Wagga Wagga, Albury and Cairns. CBDs in these towns are flourishing as a result of council limiting development outside of the CBD. Active councils are those that realise that there is a role for council to encourage businesses to enter towns rather than lazily approving major developments that have historically proven to be of significant detriment to towns of a similar size and composition.

Impact of Malls in Regional Towns

In the United States, the birthplace of the shopping mall, as early as the 1960s shopping malls were documented as having a devastating impact upon once thriving and dominant traditional commons, producing streetscapes of boarded up and decaying town centres, village centres, high streets, inner-city strips and even downtowns.

The shopping mall [compared to the pedestrian mall] is bleak, boring, bland, ugly, standardised and designed for stasis. Within them, commerce has lost its integral role of responding to the vernacular to offer unique products and services in favour of a bland, universal, standardised form of distribution, public life and place (Crawford, 1992; Dovey, 2008).

On one side, shopping malls are seen as modern responses to modern requirements of vehicle access, convenience and efficiency as well as postmodern desires for access to big brands, and the use of consumption as entertainment.

On the other, shopping malls are seen as destroyers of public places and the endogenous dynamism, pluralism and entrepreneurship that creates and evolves them.

A major facet of the discourse around shopping centres is the purported effects they have on local retail businesses and employment, as well as the economic health of the town as a whole. The opening of a major shopping centre in a regional town typically comes with the promise of jobs and an overall boost for the economy of the town.

In small communities, the development of a shopping mall produces instant change on a huge scale. The mall arrives as catastrophic investment (Jacobs, 1993), severely disrupting and often supplanting endogenous structures that have evolved over generations. Mitchell (2006) and Shuman (2007) Research argues the giantism behind the shopping mall sidelines local entrepreneurship, creativity, innovation and investment in local economies by transforming activity centres from hubs of the endogenous economy into distribution points for global capital and production.

By comparing figures from case studies in Armidale, Griffith and Renmark, research shows that immediately following the opening of a major shopping mall, initially there was some loss of local business activity and a decrease in employment. Furthermore, these case studies showed that there is significantly less local business activity and employment activity in towns dominated by shopping malls for long periods compared to those where the traditional town commons remained paramount.

Regional Councils have a responsibility to protect the long-term needs of the community by limiting the development of major shopping malls in favour of supporting the viability of the traditional CBD pedestrian mall. Beyond that, considering the predicted nationwide economic slowdown, councils need to step up and put in place measures to revitalise the main strip and encourage the kind of regional entrepreneurship necessary to stimulate local economies and weather a potential downturn.